shadow numerology traits are the most overlooked numbers in numerology 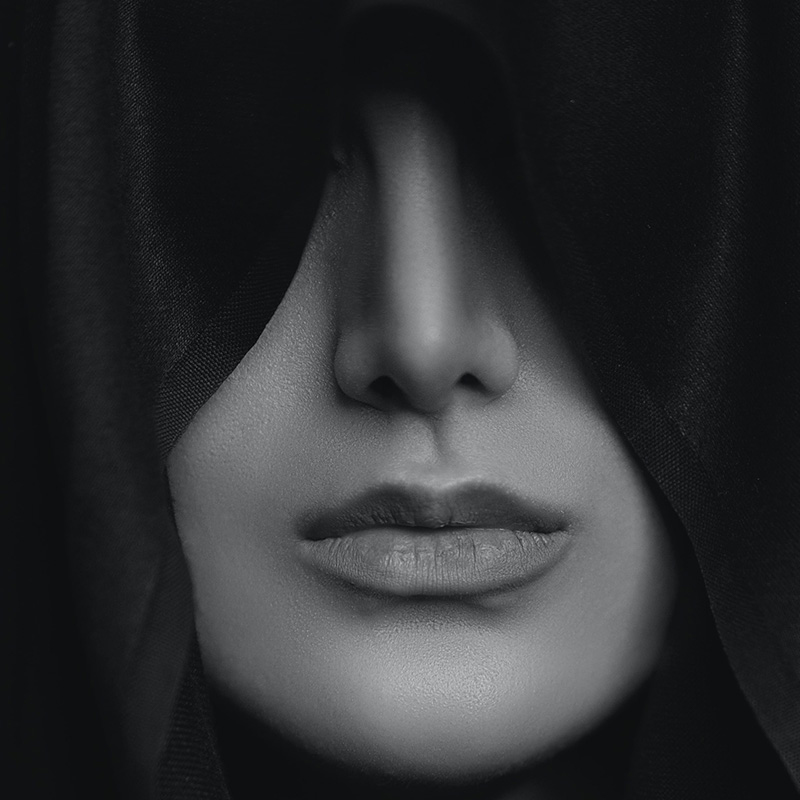 shadow numerology traits are the most overlooked numbers in numerology

Want to know What Lies Beneath in someone else?

Most numerologists will interpret shadow numerology traits as being the dark or negative side of the numerology numbers. Here are a few published examples, at life path number level, of how incorrectly the shadow number can be interpreted. This will hopefully help explain why these ridiculously superficial applications of a number, give numerology and numerologists such a bad rap amongst the critical, strategic thinking fraternity.

“Thoughts are the shadows of our feelings – always darker, emptier and simpler.” Friedrich Nietzsche

The shadow numerology traits of:

Given how important shadow numerology is and how much it reveals about the emotional or subconsciously driven make-up of a woman, the above deductions are both shocking and laughable, hence our rather cynical commentary. Moreover, they give no clear strategic direction in terms of what the shadow traits signify, nor what to do with this information thinking and planning wise.

“Archimedes was my ideal. I admired the works of artists, but to my mind, they were only shadows and semblances. The inventor, I thought, gives to the world creations which are palpable, which live and work.” Nikola Tesla 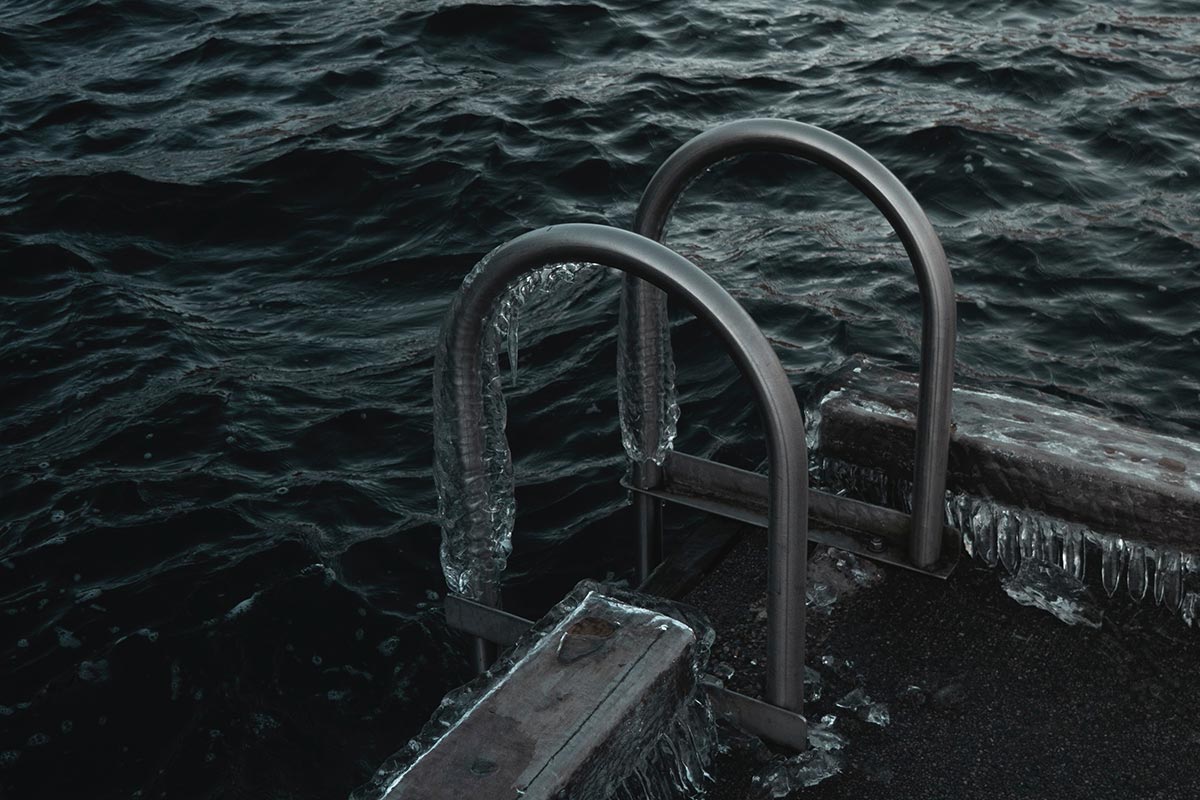 What the extensive applied numerology case study research that we have conducted through 365 Pin Code (the R&D arm of Numerology for Women) has revealed, is that shadow numerology which could also be referred to as ‘Subconscious Numerology’ is provides so much more intelligence than what most numerologists might think. Our work has completely revolutionised the understanding of shadow numbers. Here is why… When your 365 Pin Code shadow numerology traits appear in the annual lines of experiential code which our predictive mathematical model generates for you, they warrant much focused attention because they are revealing emotional and subconscious up-wellings.

“Right before I decided to come out, I went on a spiritual retreat called ‘Changing the Inner Dialogue of Your Subconscious Mind.’ I’d never been to anything like it before, and all my friends were taking bets on how long I’d last with no TV, no radio, no phone. But for me that was the beginning of paying attention to all the little things.” Ellen DeGeneres 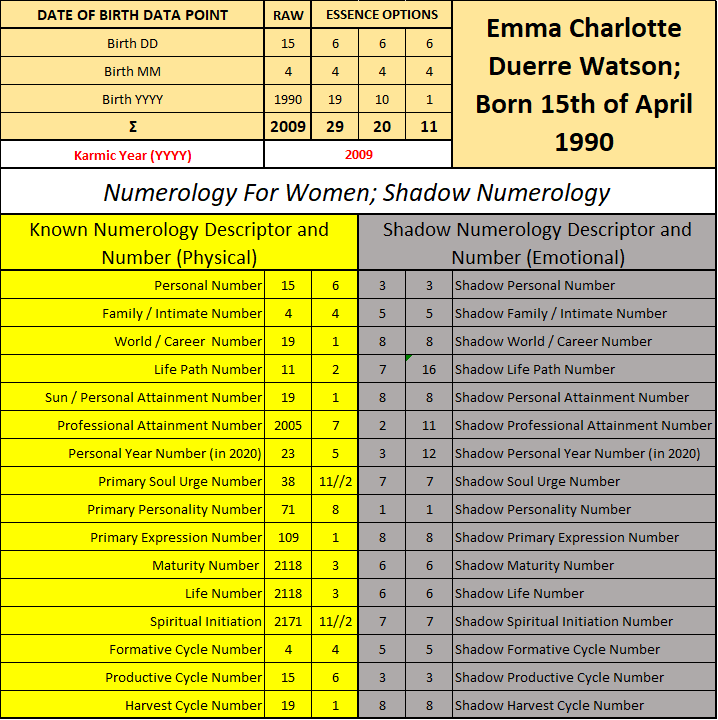 Emma Watson has a No16//7 Shadow Life Path Number. In numerology, No16 is one of the karmic debt numbers, the other three being karmic debt 13, karmic debt 14 and karmic debt 19. Having karmic debt 16//7 as her shadow life path number reveals that Emma Watson will most likely have a rather tumultuous emotional life path journey, with much heartache and many troubled or hurtful relationships (the 16, think major arcana The Tower) forcing her into isolation (i.e. ‘preferring to be single’). By being alone (numerology number 7 – the number of chosen isolation), she is provided with the necessary time and space to think, to analyse, and to search for deep, significant, matters of the heart relationship related, spiritual insights.

Using our numerology life path model, we mapped Emma Watson’s life path, year by year, from birth (1990) to present (2020) and beyond (through to 2030). In 2003, the year she turned 13, she had a No16//7 experience. What is supremely interesting, is that the karmic 16//7 presented in only this year and was not spread out (as in diluted) over a few years. When a life path experience is crammed into just one year, its intensity is super-concentrated, so whatever emotional upwelling happened in 2003 would have felt by her with every fibre of her being. This 16//7 driven year would have also synched with her No7 shadow soul urge number and No7 shadow spiritual initiation number (refer to the above table which presents these numbers in grey, on the RHS).

Given what we have presented in the above to paragraphs, just for a while, ponder on that numerology information with regard to these facts: Emma Charlotte Duerre Watson was born on 15 April 1990 in Paris, France, to English lawyers Jacqueline Luesby and Chris Watson. Watson lived in Maisons-Laffitte near Paris until the age of five. Her parents divorced when she was young, and Watson moved to England to live with her mother in Oxfordshire while spending weekends at her father’s house in London. Watson has said she speaks some French, though “not as well” as she used to. After moving to Oxford with her mother and brother, she attended the Dragon School, remaining there until 2003. From the age of six, she wanted to become an actress, and trained at the Oxford branch of Stagecoach Theatre Arts, a part-time theatre school where she studied singing, dancing, and acting.

Her 2019 Shadow Numerology Traits reveal a surge of Extreme Power!

In 2019, the year she turned 28, she had another concentrated shadow numerology traits related experience, only this time it was driven by the numerology number 17//8 (17//8 – The Star – which is the No7 expressing itself through the No1). In numerology, the number 8 synchs with money, power authority, status, abundance, karma, wealth, legal matters, leading others, organising, leaving a legacy etc. Emma Watson has the No8 presenting as her shadow world / career number, as her shadow personal attainment number and as her shadow primary expression number. Guaranteed, with all these 8’s presenting in concentrated format in 2019, it would have been an enormous year for her, with powerful emotions flooding around what the No8 stands for! The Nov 5, 2019 YouTube video provided above, attest to this!

There is so much more that we could do with Emma Watson’s shadow numerology traits and life path data as generated by our predictive numerology model, but we have made our point. The way most numerologists think of and interpret shadow numerology traits is fundamentally flawed because they are considering the number is isolation. To really understand the shadow numerology traits of a given number, the numerologist must review how that specific number is interacting with all the other numbers, especially those that appear in the client’s data string for the year. Thing is, most numerologists are metaphysical practitioners, they are not trained research scientists nor are they mathematical modellers and so understandably, they do not know how to do this. Because of the R&D work done through 365 Pin Code, Numerology for Women can offer advanced life path modelling services and for those of you who really want to know what is going on in your numbers, this is absolutely the way to go! 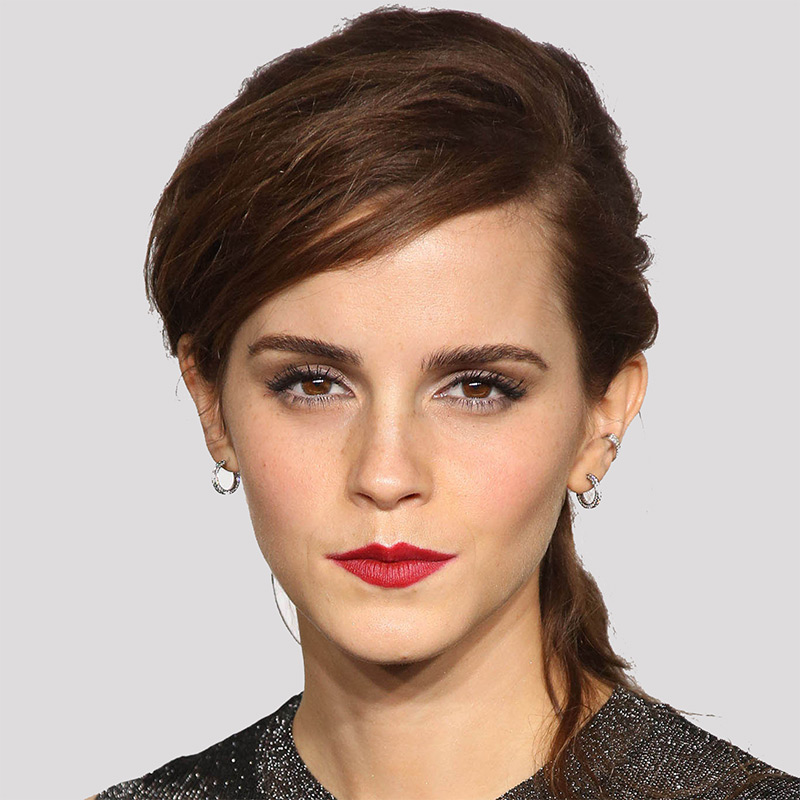