The 1976 Montreal Olympics delivered the Never to be Forgotten, Nadia Comăneci perfect 10

What the Nadia Comăneci perfect 10 gymnastics score proved was that she has attained perfection, and what made the achievement so incredibly special, was that it on the world’s greatest stage, the Olympics Games. Plato, Aristotle and Homer heartily advocated the strengthening qualities of gymnastic activity. The Greeks believed symmetry between the mind and body was possible only when physical exercise was coupled with intellectual activity. The term “artistic gymnastics” emerged in the early 1800s to distinguish free-flowing styles from techniques used in military training. Gymnastic competitions began to flourish in schools and athletic clubs across Europe and made a fitting return when the Olympic Games were revived in Athens in 1896. Between 1896 and 1924 the sport evolved into what we recognise as modern gymnastics.

“I don’t run away from a challenge because I am afraid. Instead, I run toward it because the only way to escape fear is to trample it beneath your feet.” Nadia Comaneci

Nadia Elena Comăneci (born November 12, 1961) is a Romanian retired gymnast and a five-time Olympic gold medalist, all in individual events. In 1976 at the age of 14, Comăneci was the first gymnast to be awarded a perfect score of 10 at the Olympic Games. At the same Games (1976 Summer Olympics in Montreal), she received six more perfect 10s for events en route to winning three gold medals. At the 1980 Summer Olympics in Moscow, Comăneci won two more gold medals and attained two more perfect 10s. During her career, Comăneci won nine Olympic medals and four World Artistic Gymnastics Championship medals. Comăneci is one of the world’s best-known gymnasts and is credited with popularizing the sport around the globe. In 2000, she was named as one of the Athletes of the 20th Century by the Laureus World Sports Academy.

Comăneci’s first major international success came at the age of 13, when she nearly swept the 1975 European Women’s Artistic Gymnastics Championships in Skien, Norway. She won the all-around and gold medals in every event but the floor exercise, in which she placed second. She continued to enjoy success that year, winning the all-around at the “Champions All” competition, and placing first in the all-around, vault, beam, and bars at the Romanian National Championships. In the pre-Olympic test event in Montreal, Comăneci won the all-around and the balance beam golds, as well as silvers in the vault, floor, and bars.

What this Nadia Comăneci perfect 10 sport and numerology for women case study reveals is that in 1976, her year of absolute perfection, she had a numerology number 1 duality (winning!) presenting in her numbers as well as a karmic convergence of her 14//5 pinnacle and 14//5 shadow life path numbers happening. Her 365 Pin Code Numerology charts reveal that if she did the work (karmic debt 19 and karmic debt 14 were both in play!), 1976 would be the year when it would all come together and her just reward would be legendary greatness.

“I hoped to win a medal and hoped it would be gold. I knew I was good but didn’t know I would be the one to score something that had never been done before.” Nadia Comaneci 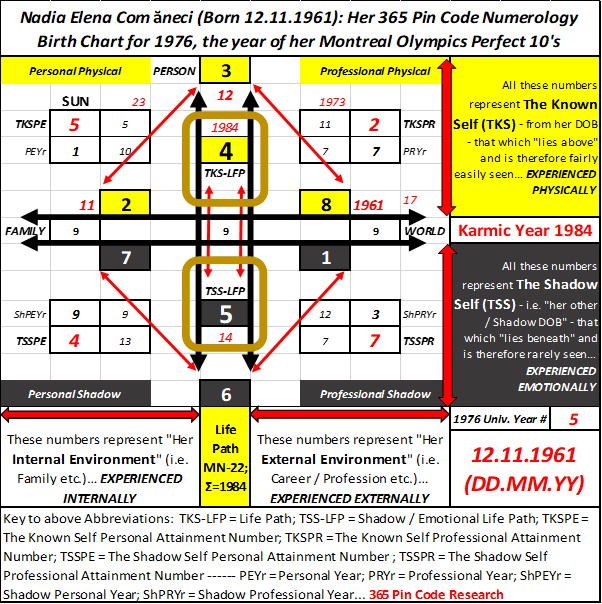 What does the above chart reveal about Nadia Comăneci born on the 12th of November 1961?

She has the Master Number 22 (the master builder, the one who is numerologically coded to leave a legacy) as her life path number (see TKS-LFP above; 1984//22//4). If you want to know how we calculated this, here is a brilliant life path number calculator with explanations. Her Shadow Life Path Number (see TSS-LFP above; 14//5) is karmic debt No14//5 which brings with it the critically important life lesson that change and personal freedom are acquired through the application of self, hard work, focus, discipline, planning, persistence, dedication and perspiration! Born on the 12th [12//3] introduces the numerology number 3 energy which is the creative, communicative, motivated, and inspired expressive. On this angle of creative expression, it is very interesting to note that her Primary Expression Number, as calculated from her full birth name is also 12//3 (Nadia = 20, Elena = 19, Comăneci = 36; 20+19+36 = 75 = 7+5 = 12 = 1+2 = 3; 75//12//3). Her Birth YYYY 1961 (1961 = 1+9+6+1 = 17 = 1+7 = 8; 17//8 – major arcana No17 The Star) synchronises with the number sequence 17//8 which is all about specialised success and is itself a very fortunate vibration! Her Sun or Personal Attainment No5 (see TSSPE above; 23//5; numerology number 5) is a kinetic energy which talks to freedom, adrenaline, adaptability, flexibility, the 5-senses driven human experience, travel, adventure, proactively challenging the status quo, pushing boundaries etc. 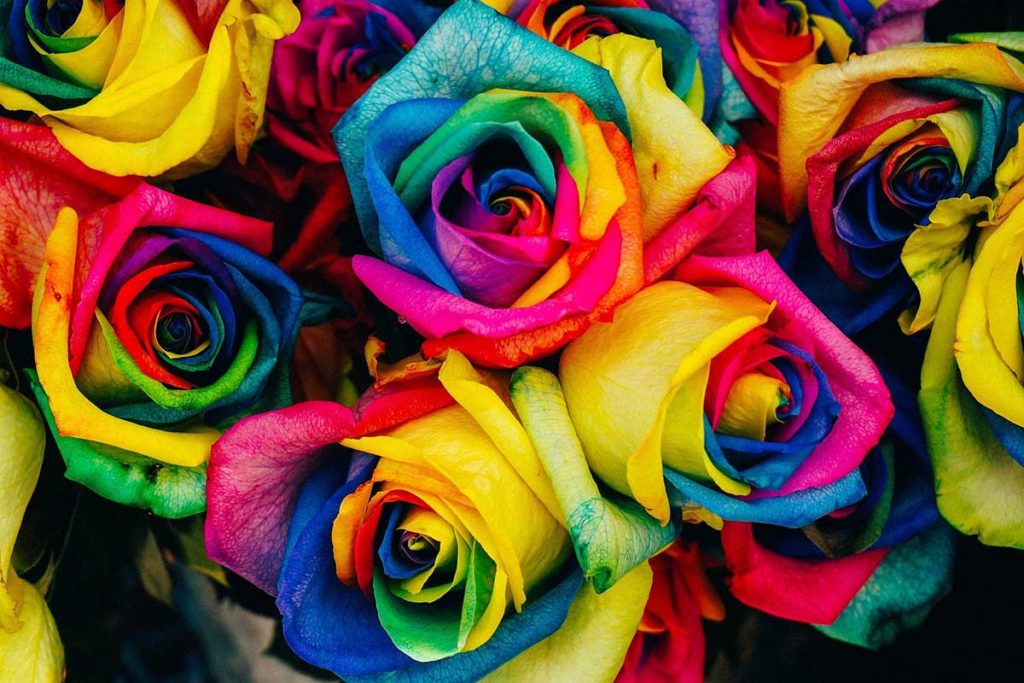 “I worked hard in gymnastics since the time I was six years old until I retired at 23 years of age.” Nadia Comaneci

The above chart reveals her karmic year calculates to be 1984, the very year she retired from gymnastics! The next step in understanding the numerology of the Nadia Comăneci perfect 10s is to analyse her full birth name so that we might better understand her karmic lessons, soul urge number, personality number, maturity number etc as well as see whether the No5 (her all-important Sun / Personal Attainment Number) presents anywhere. 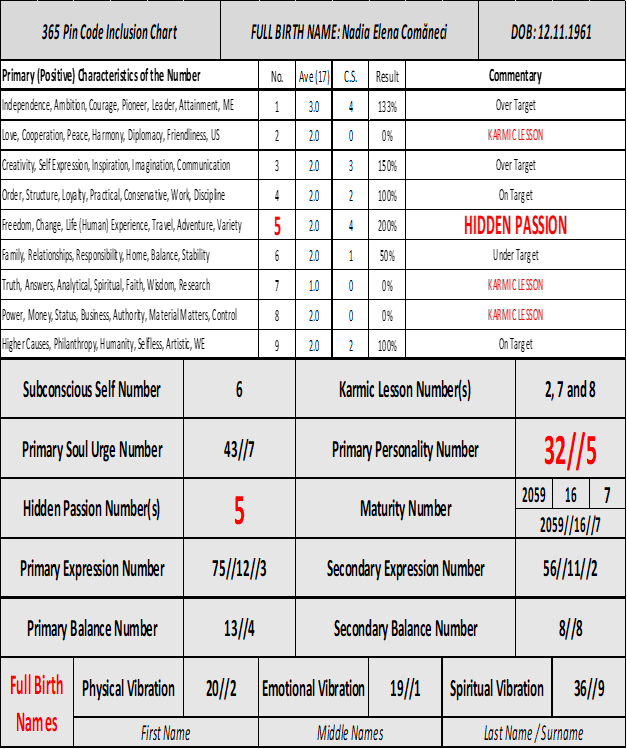 Her three karmic lessons reside with the numerology numbers 2 (cooperation, collaboration, diplomacy, supporting others, teamwork, nurturing etc.), 7 (logic, wisdom, seeking spiritually significant answers, privacy, introspection, reflection, analytics, research, perfection etc.) and 8 (money, power, status, authority, fame, fortune, business, karma as in finding the balance between the material and spiritual worlds etc.). She has a Subconscious Self No6 (the one who loves and loves to be loved; home is where the heart is). Her Hidden Passion No 5 and Primary Personality No5 stand out because these align with her No5 Sun Number. Her Secondary Expression Number (daily call name, Nadia Comăneci, reveals the master number 11 – the master intuitive, the visionary giver of illumination and enlightenment.) Her Primary Balance Number is karmic debt 13//4 which talks to work, focus, discipline, planning, organising, systems, structures, law and order, etc. as being critically important for her to feel balanced.

Next, we investigate her life path pinnacle and challenge experiences. 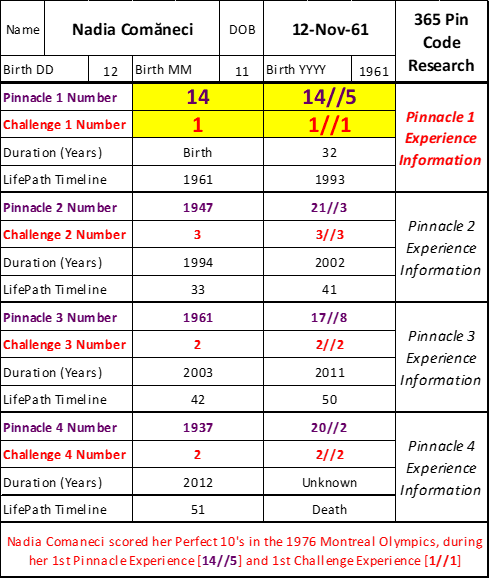 The Nadia Comăneci perfect 10s happened in 1976. As per the data provided in the above table, in 1976 she was in her First Pinnacle and First Challenge experience. Her 1st pinnacle was driven by karmic debt no14//5 (hard work and the application of self to the task at hand, will deliver much change and wonderful personal freedom). It is most significant to note that this No5 synchs perfectly with her Sun or Personal Attainment Number, Personality Number, Hidden Passion Number and Shadow Life Path Number. It is also incredibly interesting to note that 1976 is a No5 universal year [1976 = 1+9+7+6 = 23 = 2+3 = 5; 23//5] which added even more universal synchronicity to this being her most magical year ever. It was if you will, a complete and majestic convergence of 5’s.

The final piece of this puzzle rests with analysing her 365 Pin Code Numerology Annual Experience Numbers [understanding AENs actually helps power intelligent futurist predictions and futurology] with specific reference to 1976. AENs are calculated through a unique predictive numerology model that has been created by the 365 Pin Code, R&D case study strategic unit that informs much of what is published through Numerology for Women.

“I didn’t know I wanted to be a gymnast; I was just introduced to the gym. I loved the place because it looked like a hi-tech playground with mats and a lot of things I can hang from.” Nadia Comaneci 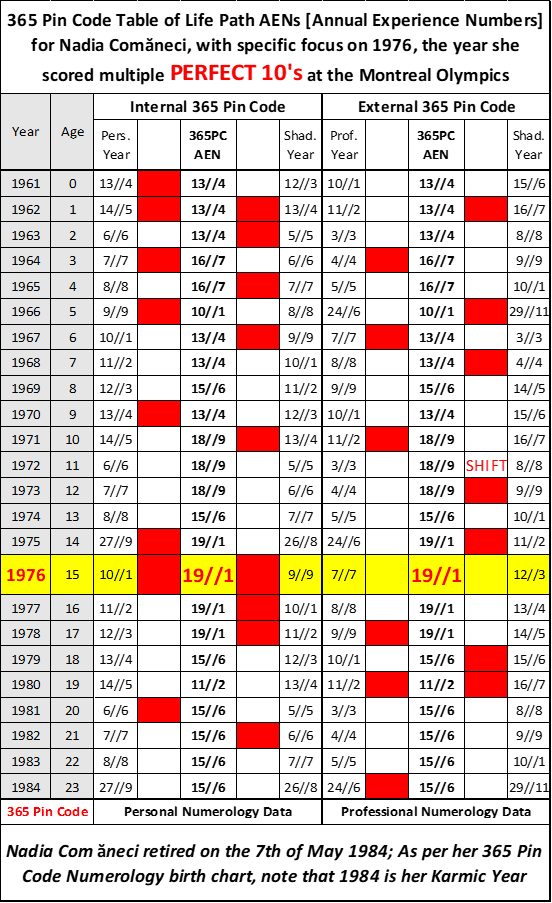 In 1976, Nadia Comăneci was in an AEN 19//1 and when things have been done right, the No19//1 presenting as a temporary vibration, synchs with greatness. This AEN19//1 experience started in 1975, when she literally did a clean sweep gold medal wise at the European Women’s Artistic Gymnastics Championships in Skien, Norway, winning every event but the floor exercise, in which she placed second. As per the AEN’s listed above, 1975 was the year which set the stage for 1976 and the Nadia Comăneci perfect 10s. The critically important thing about her numerology sequence in 1976 is the double 1’s (as in 10//1 and 19//1) presenting for her personally, physically. Such a No1 duality signals a massive new beginning and the presence of the 19 indicates the potential for career greatness. If you will please refer back her birth chart you will see that her Birth YYYY is 1961 making her World / Career No17//8, and this in turn, makes her Shadow World or Career No a 1. So, 1976 brings an emotional professional upwelling from underneath – it is the emotional career attainment result that flows from years of hard work and dedication. Her birth chart also reveals the No7 as per Shadow Professional Attainment Number (see TSSPR) and given that the No7 presents in her 1976 numerology line of code or datastring, this would be in frame too. From the moment she was born, 1976 was numerologically coded to be a massive new personal beginning and emotionally charged professional attainment year for Nadia Comăneci! 1976 was a year of extreme universal synchronicity for her with No1 dualities and multiple No5 convergences. She certainly lived up to the greatness potentiality coded within her numerology profile numbers – that is a simply magnificent result.

Nadia Comăneci – where is she Now?

Comăneci lives in Norman, Oklahoma with her husband Bart Conner. The couple own and operate the Bart Conner Gymnastics Academy, which trains more than 1,000 students. Comăneci has also opened a gymnastics school in Romania. The couple produces and performs in gymnastics exhibitions. In addition, they own Perfect 10 Productions, which sponsors a Fox television show that analyzes European gymnastics competitions, and they have hosted a food and fitness show on the cable Food Network. They also manufacture gymnastics products, such as leather hand guards and tumbling and vaulting shoes. Conner and Comăneci co-publish International Gymnast magazine with coach Paul Ziert, and Comăneci serves as editor of the magazine. Comăneci has served as a spokesperson for a variety of products, including Jockey, Danskin Avon, Kodak, Coca-Cola, and organizations, such as the Women’s Sports Foundation and the National Council on Physical Fitness and Sports. Both Comăneci and Conner are active in numerous charities, including the Special Olympics. 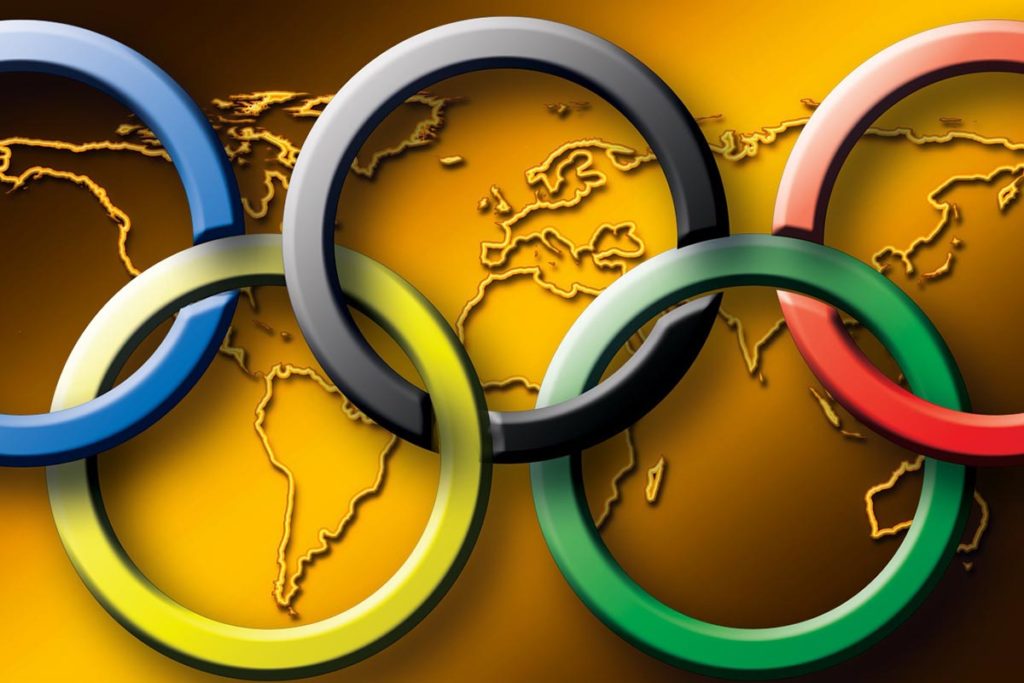 Image by dan onaca from Pixabay

Image by Free-Photos from Pixabay

Image by RJA1988 from Pixabay